I’ve been the 3+ month owner of Nexus 7. High using experience on the gadget. The only problem I have is what’s the best movie player for playing 720p/1080p files? I’ve heard the stock player doesn’t play all file formats. What do you use?

The stock video player on the Nexus 7 supports the H.263, H.264 AVC, MPEG-4 and VP8 video codecs. Many file formats are not supported by stock Android player, like playing iPhone .mov, .mkv, .mts, .avi, .wmv files. It seems to be a codec issue. However, third party enhanced video player apps from Google app store resolve the problem. With a bunch of available options, what is the best video player everyone has found for the Nexus 7? Below are the apps I’ve found.

One of the best video player. It supports multi-core core processing, so HD movies play without any lag. Easy to forward/rewind and zoom in/out. With new update, it is good but has few issues. Some h/w mode formats are not allowed to fast forward.

It is compatible with Android 4.2 Jelly Bean MR1 and supports for almost all media files and samba share stream. Playing 720p videos without skipping but no Rock chip support.

Choose one you prefer. Nevertheless, if you have installed a video player app, still met the video playback issues on Nexus 7. You can go through the video playback tips for Nexus 7 I share here. If you still can’t play MKV, AVI, MOV, MPG, MTS on Nexus 7 well, you can consider getting a video converter app to reformat your kinds of video files to Nexus 7 most compatible format H.264 MP4. I’ve never faced any playback problem after video conversion. Brorsoft Video Converter is the one app I’m using. You can download the trial version to have a test. Brief instruction on how to convert MKV/AVI/MPG/MOV/MTS to Nexus 7 MP4:

1. Download and install the best Nexus 7 Video Converter and run it to import your movie files.

2. Press the Format bar and select “Android > Google Nexus 7 H.264 Video(*.mp4)” as the export with the best video/audio settings for Nexus 7.

When the conversion ends, you will be able to import and play videos on Nexus 7 with the stock video player instead of the third-party video player apps and don’t worry about video playback issues any longer. 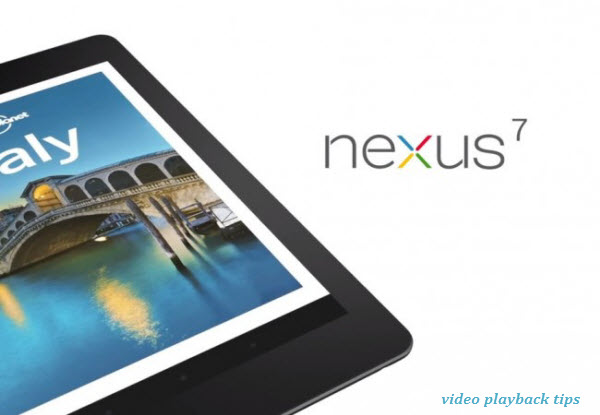